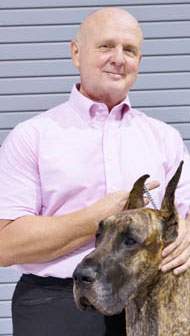 Anytime you are invited to judge a specialty show it is an honor and privilege . Being invited to judge the Great Dane Club of Las Vegas was special with the incredible venue, the famous and historical Riviera Hotel on the Las Vegas Boulevard (the strip). We haven’t been to Vegas for a couple of decades and it would be an understatement to say it has changed dramatically. Most of the major Hotels were either rebuilt or completely renovated and one could easily estimate billions upon billions of dollars spent since we were there last. Some of the hotels were like small cities with everything known to man available. The Posh architecture and design along the strip truly makes Vegas one of the top world attractions. You have to see it to believe it. As for the Riviera Hotel the 1st thing we noticed was the walls lined with pictures of famous artists that preformed at the hotel either permanently or temporarily. There were pictures of Dean Martin, Frank Sinatra, Engelbert Humperdinck, Jack Benny, Elvis Presley, Diana Ross, The Beach Boys, Sammy Davis Jr, Charra, and the famous Liberace. The Hotel was hosting the specialty show along with the all breed show in the spacious & beautiful convention center which was connected to the Hotel. Right beside the dog show was a large state wide youth wrestling tournament. Make no mistake the Riviera was full of competitive events that week end and the famous Hotel was every bit up to the task.

In my imagination I could just see one of the performers like Dean or Frank or Elvis or Liberace (he loved dogs) peeking around the convention door checking out the Great Danes saying something like “Look at that Dog! Man you could put a saddle on him and ride him!” Liberace would say something like “my gracious he’d eat my sweet little Baby Boy in one bite!”

As for the show, overall the exhibits at the specialty had good quality throughout the classes and specials. The handling was excellent and everyone showed respect with excellent sportsmanship. My BISS was a superbly conditioned 3 yr old square Black bitch (GCH Naples Sanroque Dana Honalulu Lulu). She stole my heart when I first laid eyes on her and she never let me down once. She was so hard and perfect it looked like her body had been poured into that beautiful tight glossy black coat. She displayed a confident temperament and seemed to own the ground she stood on.

My BOS was another handsome Black dog with a beautiful outline (GCH Naples Tlbrk Dana Sanroque Cause and Effect) Later I found he was related to my BISS winner. He was a superb exhibit that could do his fair share winning against stiff competition. Special note I had 7 year old veteran special that entered to me that certainly would do some nice winning in his prime (GCH Danemars Renaissance Man) that was awarded an AOM.

Very nice veteran dog! In the classes, both dogs and bitches , had several that could have won that day and on any given day. My WD/BOW was a nice thick square masculine fawn that made his presence known from the very start out of the open fawn class. (Rondomar Conspirator) He made it quite clear that he was in charge as the handler did a admirable job keeping him under control. RWD came from BBE class who was another hunk of dog.(Von Evans MNM Brancoda’s I Am a Big Kahuna) Young, thick fawn and yes he was “the big Kahuna” at the Riviera! WB came from the open
fawn(Asans White Shadow Heyy Hibiscus Babyy) Nice size bitch with a beautiful front assembly. As I watched her move I imagined there wasn’t a job for a canine that she couldn’t do. She could Run, Pull, Hunt & Guard all the while displaying beautiful confident temperament.

RWB missed by an eyelash of taking the win (Tue-Js Pacific Just Like Heaven). Young square fawn bitch out of Am bred that met the standard beautifully that will finish easily very soon. It is always a pleasure judging a winners or specials class of Danes when there is an abundance of
quality. After the show I had a renewed since of confidence that our Danes and our breeders are improving.

In conclusion, for years we kept hearing the slogan “what happens in Vegas stays in Vegas”. After observing thousands of people in the hotels and Las Vegas Boulevard (the strip) we could certainly understand why that concept would apply to a great majority. As for Kay and myself,
we left with a great memory of some excellent Danes and some sincere and competent Dane people from the Las Vegas Dane club, not to mention a great time in Las Vegas.

Thank you Mr. Watts for sharing your experience with us.