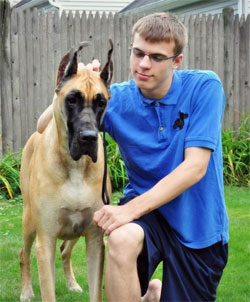 My name is John Mark Woodworth, and am age 15 in the Open Senior Class. I started his love of handling in October 2009. As part of the Dream Team, I am work with my sister R. Michal Woodworth, known to me and my family as Mikie and have successfully finished “Lily” AM/UKC CH. BRF’s America’s Ray of Sunshine on 8/18/12 by winning Winners Bitch for her last single point. I also put Lily’s second, 3 point Specialty Major at Trenton, KC in May 2012 and 3 additional single points.

Great Dane Review has asked me to continue the Junior Section previously known as Jordan’s Juniors and will now called Juniors with John Mark’s for the online magazine. I will be updating the Great Dane Junior Handlers Statistics monthly, interviewing Junior Judges, present Juniors as well as past Juniors. This, I hope will be informative and helpful to all Juniors for their future success in handling.

I am a Sophomore attending Glastonbury High Vocational Agricultural School with main interest in dogs for my potential future career. I hope to become a Professional Handler as well as having another career in the dog field. I am also a member of the Glastonbury FFA, hold The National FFA Greenhand Degree and am an Officer of the Glastonbury FFA for the term 2012-2013.

An Interview with Eddie Lyons

An Interview with Jamie Harshfield 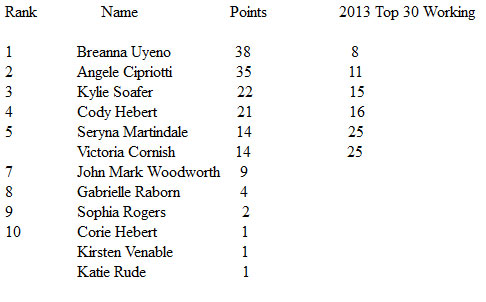 0 comments on “Juniors with John Mark” Add yours →